Into The Catacomb Abyss 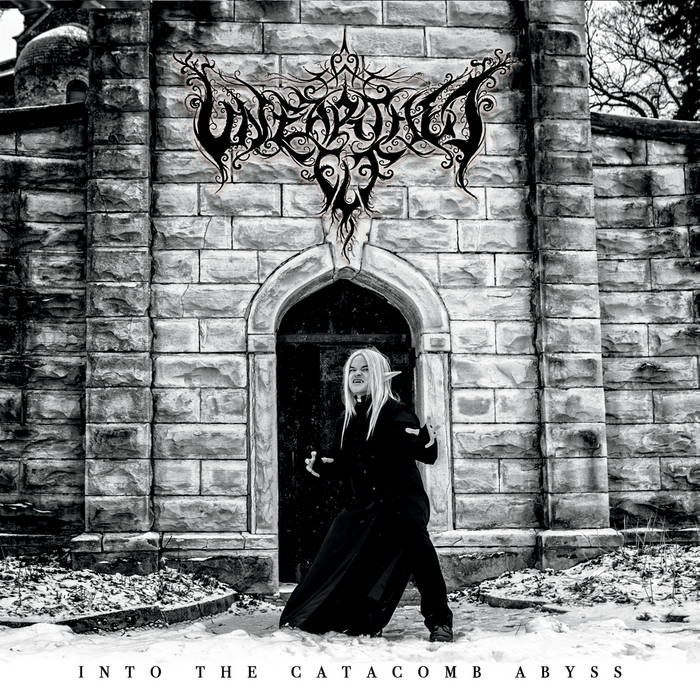 Jason Checked this out on a whim because of the album art because, honestly, how can you not love that album art? The album surprised me, it's musically solid and incredibly catchy. Do yourself a favor and check it out! Favorite track: Vial Of Holy Water Found In An Ancient, Cobweb-Laden Mausoleum.

Nerve Salad Patience pays off. I waited on this until I could snag a proper vinyl release. Perfectly executed melodic doom/power metal with a "cobwebby, drafty, red-velvet-tapestry, dusty cold castle" sort of feel, trudging along at a giant troll pace. Don't let that cover fool you. This isn't some '90s black metal band! This is sublime dark power metal. Doom on!
more...

Behind The Nine Ball

Solo album of epic fantasy doom metal insanity by one-man band Keith D (co-founder of Arctic Sleep). Melodic, catchy, fun, ideal for headbanging, and a little weird. A full 53 minutes of non-stop chugging riffs, soaring vocal melodies, and pounding drums that will lead you straight into the candle-lit depths of the arcane realms of The Catacomb Abyss.

For some songs on this album, Keith created a "choir" by layering up to 26 vocal takes at a time. The occasional cathedral organ adds to the atmosphere of the lyrical mythos, and extra percussion adds to the thunder. He wrote all of the songs during a two-month period of being stuck at home with a serious knee injury. Later, after finally completing a long and grueling recovery, he made a lone pilgrimage to New Jersey where he spent two weeks eating bagels and crafting the album at Portrait Recording Studios.

“Into the Catacomb Abyss is nothing short of a delicious treat. All ten tracks off of this magnificent debut take so many twists and turns that you never know what to expect on a first listen, and every single shift in tone and change of pace is simply something awesome to behold." - HEADBANGERREVIEWS

“Into The Catacomb Abyss is probably the hottest record I heard in a long time in its genre. The dark mood gets unfolded by beautiful melodies and it all just fits." Rating: 9/10. - YOURDEADPARTNER

"a stunning piece no matter what angle you’re looking at it from. I just simply want more from Unearthed Elf." - METALADDICTS

"Who would have thought that a tour of The Shadow Realm guided by an Elf with a flaming torch in one hand and a generous goblet of ale spilling over in the other could be so enthralling? 8 out of 10" - POWER PLAY MAGAZINE

"The debut album by Unearthed Elf is a beautiful and emotional record. At times it is stunningly beautiful." - ROPPONGIROCKS

"When it ends, just push play again. The only thing this reviewer was left wanting was another song." - GLACIALLYMUSICAL

"The singer’s voice is just perfect for this kind of thing. Featuring not only his voice in a solo capacity, but also beautifully layered with multiple harmonies and extremely enjoyable melodies, this is a firm winner in all regards." - WONDERBOX METAL

"Far more that just the soundtrack to a dungeon crawl, Into the Catacomb Abyss is an ambitious and impressive metal album." - TREBUCHET MAGAZINE

"the whole album is a must have" - SKULLBANGER

"Into The Catacomb Abyss is a hell of a journey" - GBHBL

"Viscerally emotional and pulled off with palpable feeling, the songs are intricately multifaceted and contain layer upon layer for the listener to explore." - METAL NEXUS

"Sure, it definitely caters towards the nerd side of the metal spectrum, but when it’s done this well, who cares?" - METAL ALTAR

"Keith D’s vocals are melodic, soothing, and perfectly in tune with the rest of the music at all times" - SKULL FRACTURING METAL

UNEARTHED ELF is an ancient entity, a master of night, shadow, and death, and a sorter of souls. Torn between good and evil in the realms of eternity. ELF travels between dimensions via portals located deep in the catacombs of ancient crypts, in certain mausoleums around the Earth. Heavy music can be heard echoing from these underground paths ... more

Track Name: Into The Catacomb Abyss
Rushing to the shadows as the daylight takes its hold
Portals and secrets hide deep within these walls
Passageways reveal the arcane mysteries untold
Circle of candles arranged before the throne

O, into the great beyond!
Reality torn asunder
Dost thou hear the wailing voices of the dead?
left to bleed upon the altar!

Sacrament eternal in this symphony of night
Blasphemy of Necrosteel, deception of the light
Sunken dominion sworn unto thine own self
Sealed in the depths of the catacomb abyss

O, into the great beyond!
Reality torn asunder
Dost thou hear the wailing voices of the dead?
left to bleed upon the altar!

Foreboding dreams
A promise deceased
and fading headlong now into eternity
I bless the blade
with the blood of the slain
and join the Spirits of the Mist
in the Catacomb Abyss!

Luna sanctum!
Morte aeterna!
Crypta vetus!
​
Into The Catacomb Abyss!!!
​
Track Name: Never See The Sun Again
The wyverns have set you free
Up to the skies, thou art enshrined
I consecrate unto thee
A sacrifice, of blood divine

Washed away in your tears
Exalting your darkest dreams

Elixir of ages
The communion, it has begun
A blessing of tainted
Bestowed upon the wicked ones

One never to remain
within the realm of day
In shadows to reform
Thine will be done
Track Name: Eternal Night
In my dreams I’ve found you
Just before waking and sent back to facing the curse of dawn
Behind the starlight veil
Silent it falls to the floor of the bethel
A destiny dead now sleeps within your heart

In the bleak nightfall
Shrouded in silence and guided by lust it sang to you
And the wind was cold
Bound by salvation, sworn by the blade
and sealed in this monument of
stone... in the clandestine world of the trees
Love… now is vanished and far from our reach
Gone…is the spell to invoke your release
aaaaaahhhhh...

“He giveth his beloved sleep... Death is but a portal to eternal life.”

O, shorelines are burning!
Let it go
a dream of the impossible

No despair, say your prayers
I'll take you somewhere
far from here
Track Name: Vial Of Holy Water Found In An Ancient, Cobweb-Laden Mausoleum
Subterranean altar, a shrine of eternal decay
A spiral staircase, a lantern lighting the way

Twist and turn through your dreams,
Cast of marble and steel
Where the moulds and mildews stay

The iron-gate swings wide, as night devours the day
Where the spirits reside, the crystals glow in the cave

Branches sway with the wind,
howling deep from within
darkened chambers, it’s unexplained

Seven million years!
Track Name: Lighting The Mummy On Fire
Deep within the pyramid's tomb
bandaged corpse, bringer of doom
it's covered with dust, it's breaking the spell
Rise from your grave
Lighting the mummy on fire!

Releasing fumes into the air
you hallucinate, you don't have a prayer

Use the torch
Use the candle
Use the lantern
Use the matches
Use the flare
Use a fire spell
Breaking the curse of your deepest desires
Six ways of lighting the mummy on fire...
BURN!
Track Name: Realm Of The Beholder
The Watcher has followed us
beyond the forest and the stream
And in the acrid air, when the light has disappeared
I'll be the last thing that you'll see

Inscriptions misguided us
and from the grave there's no return
The magic breaks right through,
and the mirror of your doom
reveals a memory turned to stone

Beyond the razor's edge
torn to shreds, they're dead again
And in the final hour
a soul to be devoured
awaits the judgment of The Gods

To be the opulent one
in the grave, in the grave
Could be the end of us all
Gone away, gone away

Born to live, live to suffer
Torn apart, from one another
Though I planned of this day
How could I leave you this way
You will never know
And all the ghosts that I've seen
have sworn allegiance to me
but I have let them down

To be the opulent one
in the grave, in the grave
Could be the end of us all
Gone away, gone away

Bandcamp Daily  your guide to the world of Bandcamp

Featuring Gary Bartz, 5 years of Rhythm Section Intl and an LP of the week by Nicolas Jaar